The 5.4 kilometer long bypass including 1350 meters long overhead bridge will be completed in three months.

Speaking on the occasion, the Prime Minister directed National Logistics Cell to complete the project within three months instead of its earlier tentative time of four months. He directed that quality of the project should be ensured.

The Prime Minister said this project will facilitate the tourists from all over Pakistan and people of Rawalpindi and Islamabad.

He said last government ignored projects which were started by the government of Nawaz Sharif. He said project of metro bus service to airport was on halt but it was resumed by the incumbent government.

Shehbaz Sharif said last government only deceived the public instead of introducing projects for public welfare.

He criticized PTI Chairman Imran Khan for misleading the nation and building a fake narrative of conspiracy. He said Imran Khan conspired to divide the institutions and termed other political parties enemies of the country. He said audio leak of Imran Khan proves him a liar.

He said government will make all out efforts to strengthen economy of the country and bring down the inflation. He expressed hope that Pakistan will soon come out of hard time.

Earlier, the Prime Minister was also briefed about the project. 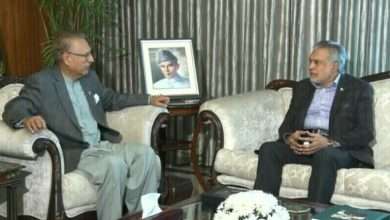